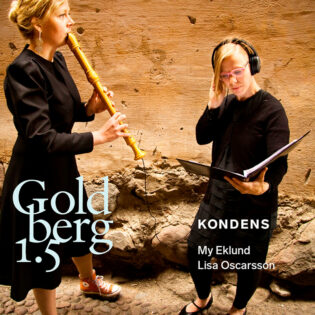 ”The Goldberg Variations is a Baroque piece still played, acclaimed and discussed today, with regard to interpretational issues as well as its origin and structure: Is Glenn Gould’s interpretation “correct” even though it is not traditional in its execution? What tempo should the aria have? Did Count Kaiserling suffer from what we today would call insomnia? Why did Johann Sebastian Bach create so few pieces with variations, and is it justifiable right to rearrange such a conscientiously composed piece at all?
In 2015, Kondens received a substantial endowment from The Swedish Arts Council: A commission of five new pieces by five different composers, and the project was called Goldberg 1.5. The concept was to let the composers be inspired by the originals and then go on to create their own interpretations. The new variations are presented side-by-side with the originals, integrating with them and creating a new composition together. The driving force behind this project is curiosity, how these variations, created by female and male composers with various musical backgrounds, whose lifetimes may be separated by centuries, would be perceived by audiences, composers, and by us.
Knowing that this music from a distant era is, due to its beauty, still sought-out today is impressive. The fact that these new pieces bear the imprint of history increases their presence and relevance. This was our mission, to celebrate music and its profound impact across time, age and style.
Our versions are not a remix, where old and new material are fused together, creating a hybrid. A more apt description is to call them a time-specific collage where the separate parts are gathered together and displayed in the same frame. We hope that the interplay between the versions, the impact of history and the present moment, along with placing the original versions in a new context, will provide listeners with a sense of timelessness.
The five Swedish composers who honored us with their compositions are Daniel Hjorth, Ida Lundén, Mattias Petersson, Jan Sandström and Lisa Ullén.”
My Eklund and Lisa Oscarsson

Kondens consists of My Eklund (recorder) and Lisa Oscarsson (organ). Several works have been dedicated to this ensemble, such as Geist and Ghost, by the Malmö-based composer Daniel Hjorth. Their latest commission Goldberg 1.5 premiered at the 2016 New Directions festival, where it was also recorded by Swedish Radio P2 Live. Since 2014, this duo has regularly held concerts in Sweden, primarily, but also in Norway. Kondens has been acclaimed by the media for their innovative approach and musicality. The Swedish Culture Council is behind most of their commissions and the Swedish Arts Grants Committee has arranged grants and funding.