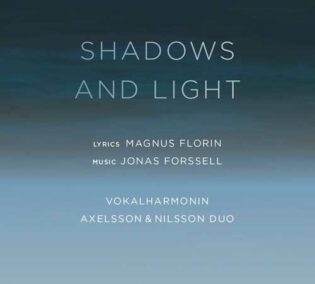 Jonas Forssell:
”The text has its own, rather dramatic story. We – Magnus Florin and I – discussed possible subject matters, modernisation, singability and sales potential, but when we were rapidly approaching ”the moment of no return” events took place that radically changed our course. Magnus wrote the following in an email on July 24, 2011:

… now everything is overshadowed by Utøya. The number of dead that keeps on rising, the survivors sharing their stories. After these days, the thought has been growing inside me that it is a viable perspective for writing. And adapt it to the Tenebrae format of threes, of trinity – days, hours, prayers. I’m sure there are many potential tricky spots, but the subject matter is grand in scale and easy to relate to. If we proceed, I would like to find support in John Donne’s “No man is an island”, which has the light we want to include as well. What do you think?

I felt the same way and that’s what we did. The trinity pattern is repeated in countless ways. The tragedy on Utøya island in Norway where 69 young lives were snuffed out took place on the 22nd of July, which was a Friday – a Friday of suffering. Magnus’ soaring yet spare poetry is presented as three days where each day begins with sunrise and concludes at sundown, and where each day is divided into three portions that correspond to the three nocturnes of the Tenebrae, and where every part is in three lines, like the three responsories in each nocturne. Musically, I treat each part more like a response, while Good Friday is twice as long as the other days.

Interfolied between days, and in the middle of the Good Friday portion, are “original responsories”, three in number here too, from each of the solemn week days. Between days one and two, Eram quasi agnus innocens (“I was like an innocent lamb”) from Orlando di Lasso’s four-part cycle. In the middle of the long second day, Don Carlo Gesualdo di Venosa’s six-part Animam meam dilectam tradidi in manus iniquorum (“I delivered the soul I loved into the hands of the wicked”); and before the final day, Tomás Luis de Victoria’s Aestimatus sum cum descentibus in lacum (“I am counted among those that go down to the depths”. The responsories are all about the anguish a vulnerable person facing death experiences, without being tied to any specific time, place or person.”