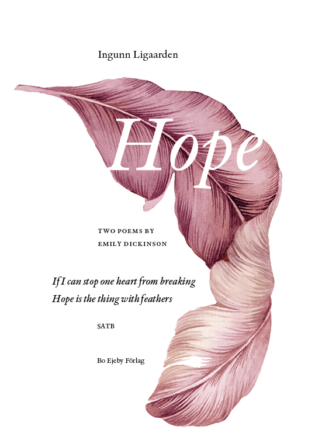 Two poems by Emily Dickinson – ”If I can stop one heart from breaking” and ”Hope is the thing with feathers” – set two music for mixed choir by Ingunn Ligaarden.

On Ingunn Ligaarden’s own website you will find rehearsal audio files.

The composer says: ”With these songs in these times of great uncertainty I wish you hope. Hope for your life, hope for your future.”

A version of this music is also available for male voices, which was awarded the 2nd prize in Linköpings Studentsångare Composition Award 2020.

Ingunn Ligaarden is a pianist, organist and composer living in Sweden. She started playing the piano when she was two years old, a few years later the violin and eventually the organ. After graduating from the Royal College of Music in Stockholm she has been working as a concert musician and accompanist, collaborating with numerous choirs and soloists in Sweden, opera singers as well as pop artists. She has also participated in CD recordings and recordings for radio and TV. Ingunn has composed music for several of Sweden’s professional ensembles and orchestras within both jazz and classical music. Since 2010 she works as freelance pianist, organist and composer and since 2017 as publisher, Sheet Music Plus, US. 2016, 2017 and 2019 Anders Frostenson foundation scholarship for lyricists. In 2017 She qualified for the quarter final of Concurso de Composiciòn para Piano Fidelio, Madrid. Her musical education includes; 2010–2013 Music Composition and Arranging, Örebro University, 2010 Degree of Bachelor in Music, Royal College of Music, Stockholm and also 2004 Medical Degree, University of Gothenburg.