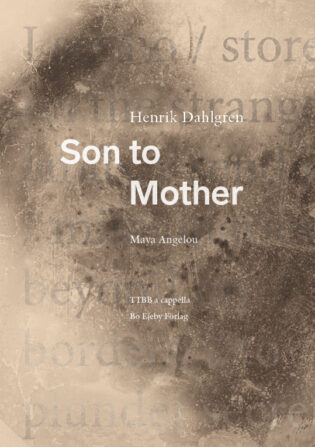 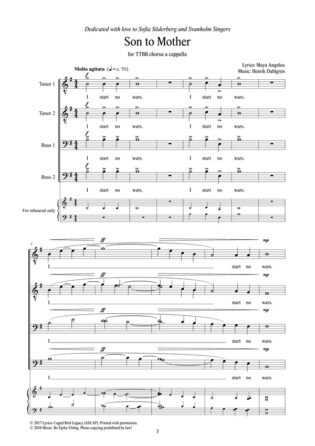 ”In 2017, I was commissioned by the Svanholm Singers to write a work for inclusion in a concert marking 70 years since the proclamation of the Universal Declaration of Human Rights. Choosing a text was difficult. I came across upon a poem by American poet Maya Angelou, but it struck me as being too powerful and emotional for the music I was writing to carry it; everything I composed sounded banal next to Angelou’s words.
I soon realized that I could use silence to enhance the text, rather than heaping layers and layers of music upon it. Silence is both terrifying and serious – in a sense, it is the only adequate counterpoint to the poetry.
So, I decided to build the piece on silence.
Though the beginning of the piece is the opposite of silence – a scream of desperation – I followed that outburst by cutting the poem’s stanzas into single words, repeated in a different order each time, almost in the manner of a mantra.
Finally, they end up in the right order and suddenly the words take on their rightful meaning. I hope, in this way, the music is equally powerful as the words.
Son to Mother has been well-received and has gone on to become one of the most widely performed pieces I have written. It has been performed at various festivals and in various countries, including Taiwan, France and China – where it only just made it past the government censors.”

Henrik Dahlgren is a Swedish composer, born 1991. He has been studying at the Academy Of Music in Malmö with Prof. Rolf Martinsson and the Royal College Of Music in London with Dr. Haris Kittos. Henrik started his musical career as a drummer and has ever since worked in a very wide range of different genres and styles, both as a performer and as a composer. – ”To evolve from a hard rock loving drummer to a contemporary composer has not been an easy path to travel but when I first discovered the beauty and pureness of the human voice and the choir, I found MY instrument. That’s where I belong!” – Henrik Dahlgren

Here’s an excerpt of the piece, from the album Exclusive (FRCD105) by Svanholm Singers and conductor Sofia Söderberg.