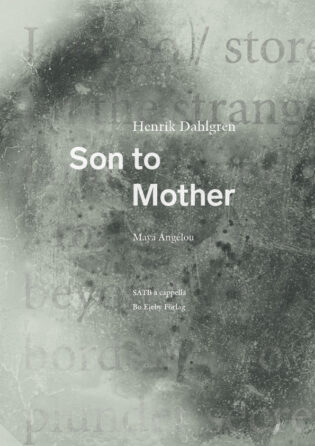 A both forcible and low-key song where music and lyrics leaves no one untouched.

”In 2017, I was commissioned by the male voice choir Svanholm Singers to write a work for inclusion in a concert marking 70 years since the proclamation of the Universal Declaration of Human Rights. Choosing a text was difficult. I came across upon a poem by Maya Angelou, but it struck me as being too powerful and emotional for the music I was writing to carry it; everything I composed sounded banal next to Angelou’s words.
I soon realized that I could use silence to enhance the text, rather than heaping layers and layers of music upon it. Silence is both terrifying and serious – in a sense, it is the only adequate counterpoint to the poetry.
So, I decided to build the piece on silence.
Though the beginning of the piece is the opposite of silence – a scream of desperation –, I followed that outburst by cutting the poem’s stanzas into single words, repeated in a different order each time, almost in the manner of a mantra.
Finally, they end up in the right order and suddenly the words take on their rightful meaning. I hope, in this way, the music is equally powerful as the words.
Son to Mother has been well-received and has gone on to become one of the most widely performed pieces I have written. It has been performed at various festivals and in various countries, including Taiwan, France and China – where it only just made it past the government censors.

This version is an adaptation for mixed choir of the original male choir version.” – Henrik Dahlgren

On YouTube you can hear and see Vocal Art Ensemble under Jan Yngwe sing Son to Mother in S:t Jakob’s church, Stockholm, February 2020.