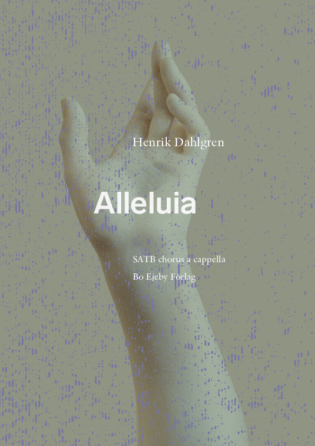 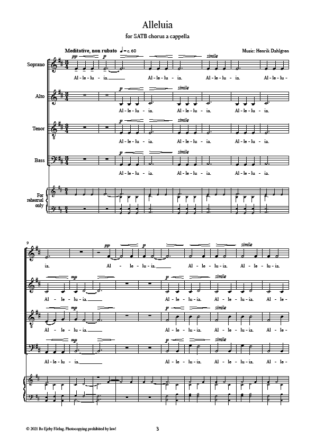 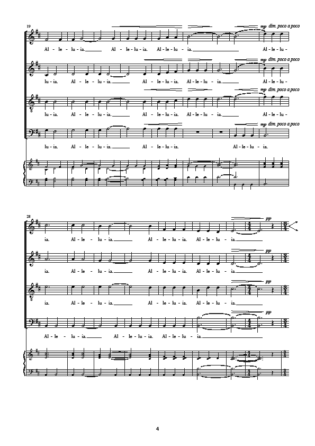 The single word ”alleluia” is used as the basis for harmonic exploration as the slowly moving pulsed a cappella harmonies build and diminish. Feature a soprano soloist or the section on an ethereal descant that elevates the texture to sublime heights.

”This piece came about for two different reasons. The initial musical idea evolved while I was working on a short study for piano, so the piece was strictly instrumental.

The other idea stemmed from a discussion with my friend and mentor Dr Phillip Cooke, about why the word “Alleluia” is so commonly used in choral music. Apart from the obvious reasons – “Alleluia” being a significant word in the sacred music tradition, and so on – we discussed the multiple possibilities a composer has with a word like that, in the sense that different syllables can be stressed, such as alleluia, alleluia or alleluia.

This was something I used as the other structural building block in the composition, and I added “Alleluia” as the only word, but with the emphasis moving to different syllables throughout the piece. For me, the setting of a single word like “Alleluia” is far from any texts I usually set. The word, however, has a strong anchorage in musical tradition and composers have always set this word in all kinds of different ways.
In this composition, I am interested in the word itself, the build-up of the word, the structure of the music, and adding something to the musical tradition of setting this famous word to music.

This piece was premiered by the University of Aberdeen Chapel Choir at King’s College Chapel in Aberdeen, Scotland. The performance was conducted by their Director of Chapel and Ceremonial Music, Stuart Muir.” – Henrik Dahlgren