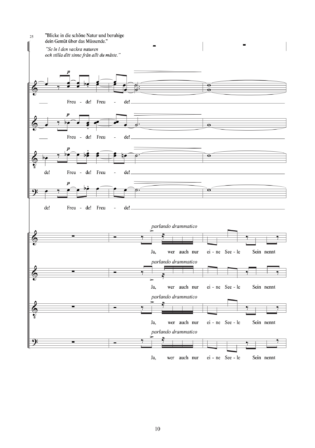 A paradise lost – A choral work in honour of Ludwig

In the symphony popularly known as the Pastoral, Beethoven delineates his deep love for nature, for the peace of the countryside along with the drama of a thunderstorm. Little could he know how industrialism, urbanisation, exploitation and a general lack of respect would come to be a threat to Mother Earth.
When we hear the nightingale, the cuckoo, and the rumbling of thunder in Beethoven’s sixth symphony, the aim of the composer is to express his emotions with regard to these sounds of nature rather than imitate them (Mehr Empfindung als Malerei!). Yet the Pastoral Symphony became a model for 19th century programme music composers who wished to renew the symphonic format with storytelling and a freer artistic idiom.
The vocal work Det förlorade paradiset (“The lost paradise”) makes reference to Beethoven’s ontologically anchored love for Creation, but also to the fundamental tension between the idyllic and encroaching threats, the very factors that give the Pastoral Symphony its richness and inevitability. The lyrics have nothing to do with John Milton’s famous epos “Paradise Lost”, they foretell an approaching apocalypse created by mankind in this age of pollution and climate change.
The choral text consists of fragments of Schiller’s “Ode an die Freude” (used by LvB in his 9th Symphony). A few quotes by Beethoven will be recited as well.

The basic principal of this composition is to present soothing parallel – tonally based – streams of nature sounds and idyllic surroundings with the gathering of ominous clouds of approaching disaster: ferocious fires, torrents of rain and stormy winds (where the singers make use of clusters, chanting, growl, stamping their feet, etc). Doch mehr Empfindung als Malerei! (emotion rather than mere imitation). A nod or two to Mr. Beethoven by way of droning and using chromatic runs.
The performance can be choreographed for extra impact, but it is equally possible to perform the music as a concert piece. – Kjell Perder